What Kind Of Spiders In Denver Should You Be Scared Of?

The short answer is, there is little need for a fear of spiders in Denver. Out of more than 3,500 species of spiders in the United States, only two are dangerous enough to merit a doctor’s visit. The vast majority of spiders are just trying to do their part to cut down the insect population, protect your garden, and keep other harmful insects out of your home.

However, just because you shouldn’t fear them doesn’t mean that you shouldn’t be cautious. Though there are only two species of spiders worthy of fear, it’s worth your time to know how to identify them for your own safety. Keep reading to learn more about Denver spiders, spiders that can kill you, and spider prevention tips that can keep chemicals out of your home.

Types Of Spiders In Denver 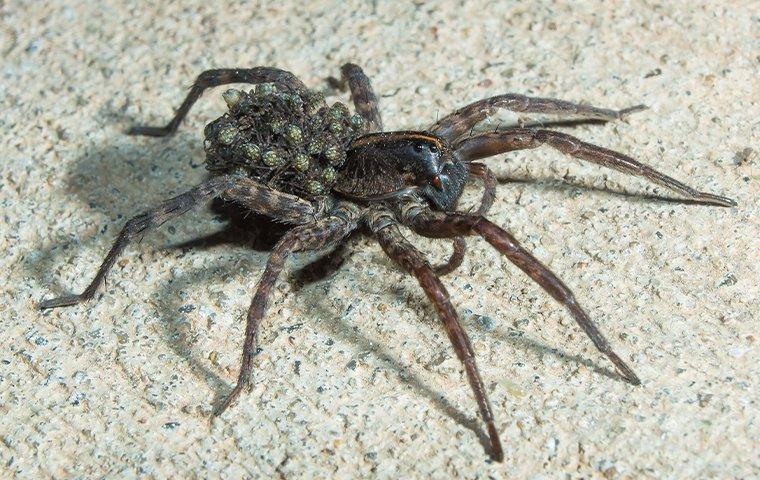 Common house spiders in the area may look intimidating, but most are harmless to humans and lethal only to the pest prey that hides in your home. The most common spider found in homes is the funnel web spider. As one of a few big brown spiders in Colorado, it is often mistaken for a brown recluse, but the funnel web spider is harmless, making its dense, web retreat in bushes or on the corners of buildings to trap their insect prey.

Jumping spiders are one of the most diverse-looking species of spiders and are also common in Denver. With their fuzzy legs and big eyes, and bright and colorful designs, they may look more dangerous than they are. The scariest part about these spiders is the startling way they jump when hunting for prey.

Some other Denver spiders can bite but not require medical attention. These include tarantulas, wolf spiders, and the woodlouse hunter. Symptoms of these bites are painful and most often compared to the feel of a bee sting. The greater concern is with the two most dangerous spiders in the US, also residents of Colorado the black widow and the brown recluse.

Are Spiders In Denver Dangerous Enough To Kill People?

Even the most dangerous spiders in the U.S. are rarely lethal. Perhaps one of the greatest causes of a fear of spiders, the black widow, only kills around seven people a year in the United States, with around 2,500 bites reported to poison control centers annually. That may be a low lethality rate, but seven people a year is still too many, so knowing about black widows and how to avoid them is an important skill to have.

While black widows can vary in color, they have a distinctive shiny, round abdomen and sharp segmented legs. Sometimes they have white, yellow, or red dots on their backs, and of course, there’s the red or yellow hourglass on their abdomens. Black widows are not aggressive and do not like to be out in the open, so it’s important to be extremely careful in likely hiding spots such as dark garage corners or woodpiles.

Finally, the brown recluse is another species of concern. Often confused with brown spiders in Colorado like wolf spiders, brown recluse spiders are much harder to identify than black widows. Thankfully, they are not one of the few spiders that can kill you. The greater risk with these bites is an infection caused by the open wound the bite can produce. A brown recluse will be one color without stripes or patterns aside from the violin-shaped mark on its back. They are also not likely to bite unless provoked. Be wary of cardboard boxes and woodpiles.

Spiders stick around for one reason - there’s enough to eat. For the most part, spider prevention comes down to keeping your home and yard clean and well-maintained to deter the food that spiders like to eat. To keep spiders away from your home, try these tips:

1. Turn your porch light off at night.

2. Clear away webs inside and outside regularly to disrupt spiders and discourage them from sticking around.

4. Store outdoor trash in a sealed container away from the home.

5. Don’t store woodpiles or other yard decorations near the home.

Limiting their hiding places and eliminating their pest prey can go a long way toward deterring spiders on your property.

The Best Control For Spiders & Their Pest Prey In Denver

Beeline Pest Control received an average rating of 4.3 out of 5 stars from 196 reviews. 4.3