Home › Blog › Why Are The Ants In Colorado Springs Dangerous?

Why Are The Ants In Colorado Springs Dangerous?

Ants are among the most common types of pests known for arriving unexpectedly amid barbeques, picnics, and other outdoor events with lots of food. Ants are insects with six legs, antennae, and a skinny waist connecting segments of their bodies. As largely omnivorous scavengers, ants might consume a diet that consists of items including tiny insects, seeds, nectar, and more plant-based material.

Ants will create large nests housing massive numbers of ants that represent a colony. Workers spend a substantial amount of time away from the nest site as they search the surrounding area for sources of food. Estimates vary, but at least 12,000 different ant species exist throughout the world.

What type of ant has wings? Most ant species form colonies that include a group of reproductive members with wings. These ants are usually known as alates or “swarmers” because they often congregate in large groups or swarms.

A report from the Colorado State University Extension explained that harvester ants (Pogonomyrmex spp.) exist in many species, primarily in states located west of the Mississippi River. Often following a rainfall, large “swarms” of winged male and female harvester ants emerge. Harvester ants are a problematic species that form large underground nests in lawn areas and create large barren patches surrounding the nest that lack any vegetation. Harvester ants will also deliver a painful sting when they perceive a threat to their nest, and some people might endure harmful allergic reactions.

Are you wondering how to get rid of ant infestations? A seasoned Colorado Springs pest control professional receives significant training that involves how to control ants in home areas and will typically pinpoint the likely points of entry, which require some remedy that will prevent subsequent invasions. 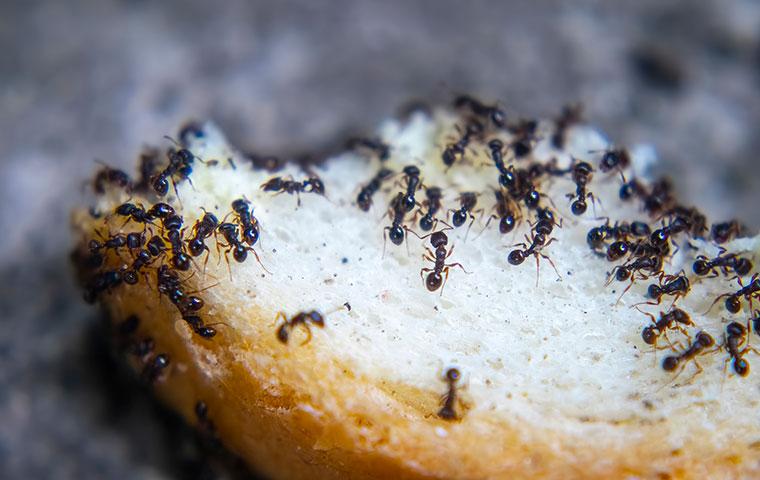 The Many Types Of Ants That Can Invade Your Home

The Denver region is home to a wide variety of ant species, several of which will invade homes. Among the most commonly encountered types include:

During Colorado’s winter months, the majority of ant species either “overwinter” indoors or transition to a “hibernation-like” state until the spring.

It Can Be Dangerous To Have Ants In Your Home

Ants are associated with salmonellosis, E.coli infection, and a variety of other troublesome health-related concerns. Once indoors, ants will contaminate surfaces and food.

How And Why Ants Find Their Way Into Your Home

Why are ants coming into my house? Ants will move indoors, seeking food, water, or shelter.

How do ants communicate with other members of their colony? One primary way that ants communicate involves using pheromone chemicals, which researchers suggest they produce in the hindgut or using various types of glands. As they move, ants create a pheromone trail that will indicate the presence of danger or sources of food.

You can witness evidence of pheromonal activity as ants form long lines of colony members marching along the same path. Ants also use their antennae and legs for sensory purposes, such as detecting vibration.

The Secret To The Best Ant Control For Your Home

The experts with Beeline Pest Control know how to get rid of ants in the house safely and efficiently and will happily provide ant-prevention tips for property owners in Colorado Springs. Contact us today regarding our treatment options.