Home › Blog › The Problem With Boxelder Bugs In Denver

The Problem With Boxelder Bugs In Denver

The mountain ranges, scenic backdrop, and mild climate of the Mile-High City attract some 30 million tourists to Denver’s metropolitan area each year. Unfortunately, the favorable, dry weather and surrounding landscape also attract many insects to the region, including boxelder bugs native to the western United States. 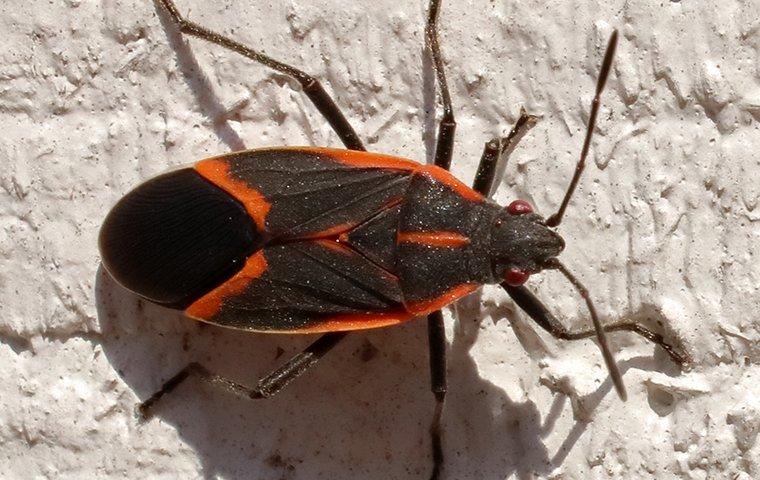 Boxelder bugs are nuisance pests, and they usually don’t cause a problem for homeowners unless they’ve begun nesting inside the home. These bugs primarily live outdoors but, in the fall, when the temperature drops, they seek a warm, dry place to overwinter; a search that may lead boxelder's into your basement or within the walls of your home, or in an outside structure such as a shed or garage. And while boxelders don’t seek out food in the home or aren’t known to cause structural property damage, they do leave a mess in their wake.

You may overlook boxelders at first, but when they emerge in the springtime, they do so in droves—by the hundreds, in some cases—and you’ll be left with a heap of boxelder feces, carcasses, and other debris in places that may be hard to clean.

Read on for more information about boxelder bugs, problems you may encounter with them, and prevention tips.

What Are Boxelder Bugs?

Boxelder bugs are black with red or orange colorations on their backs, with adults measuring a half-inch in length. Boxelders’ young offspring, known as nymphs, are bright red.

Aptly named for its preferred food source, boxelders feed on the juice contained within the seeds produced by boxelder trees, as well as developing leaves; they’ll also feed on the seeds of ash and maple trees, and less commonly, on the fruits of some trees and plants, such as apples, plums, and grapes. Boxelders aren’t known to cause significant damage to yard plants, flowers, and trees.

Boxelders aren’t known to carry disease-causing bacteria harmful to humans or pets, and they’re also unlikely to bite unless provoked. However, if boxelders nest in and around your home, they’ll leave behind unpleasant debris, which can emit odors that ultimately attract more boxelder bugs to the same spot. It's not always possible to clean up after them because they nest in cracks, crevices, and other hard-to-reach places.

Boxelders also leave behind red stains, which can discolor walls, clothing, and upholstery. The stains are essentially the bugs’ fecal matter—yuck! —being spread along walls, bedding, and furniture, and can be difficult to clean. If they sense danger, boxelder bugs will emit a foul-smelling odor, which their bodies will also release if they are crushed.

To prevent boxelder bugs from nesting in and around your home, and discourage all other pests from doing so, consider the following preemptive measures:

If you have boxelder trees in your yard, trim them regularly. If the problem persists, consider removing them.

To further discourage boxelders from entering your home, you may also use essential oils. Boxelders particularly dislike the smell of cinnamon, eucalyptus, lavender, and tea tree oil, which work as natural repellents, and citrus oil can be used as a natural pesticide.

Don't try to eradicate the problem yourself if you suspect you may have boxelders in your home. Remember, boxelders emitted an odor when fearful—and that odor only attracts more boxelders! For advice and assistance, call the professionals at Beeline Pest Control today.

Beeline Pest Control received an average rating of 4.3 out of 5 stars from 155 reviews. 4.3