Home › Blog › Are You Struggling With A Hornet Invasion This Summer In Denver?

Are You Struggling With A Hornet Invasion This Summer In Denver?

Stinging insects are one of the most common pests during the summer months in Denver.  Flying pests, including bees, wasps, and hornets, can usually deliver a painful sting to humans approaching their nesting locations or who the insects consider a threat. While most people that endure a sting will experience only minimal discomfort and irritation, those with allergies might need medical attention, as roughly 500,000 people in the U.S. are treated in emergency rooms each year.

There are more than 4,000 various species of wasps in the U.S. Wasps are typically more active during the day, particularly in the summer and early fall months. Hornets are one of the most common types of wasps and tend to be aggressive.

Are wasps and hornets the same? Hornets, such as yellowjackets, are a type of wasp, and they have a variety of characteristics that make them unique.

What's the difference between wasp and hornet? Wasps usually have a thin body style, while the body of most hornets is more rounded and is slightly larger. Hornets are typically brown, black, and yellow colors, while wasps are more colorful, and you may see them in shades of red or blue. Unlike wasps that often lead a solitary existence, many hornets live together in large social colonies.

Keep in mind that hornets can be dangerous and those who are stung should promptly wash the skin with soap and water, remove the stinger if possible, and use an ice pack to minimize any swelling. 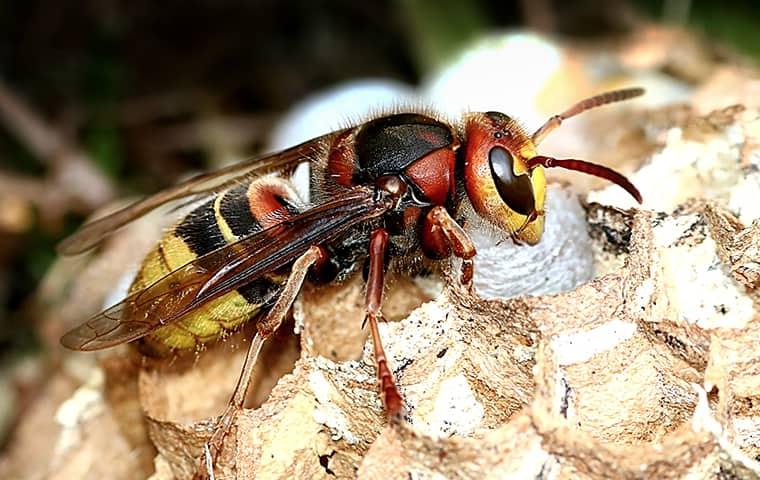 Based on the possible dangers that hornets and other stinging insects pose, property owners are encouraged to consult with a licensed pest controller when they detect a nest on the property. The professionals have the proper safety gear and treatment options to eliminate these concerns.

Is This A Hornet?

The aerial yellowjacket is a slightly smaller creature that is predominately black and yellow. Unlike bald-faced hornets that commonly build nests in shrubs or trees, yellowjackets will often construct their nests on manmade structures such as homes and buildings.

Ways To Deter Hornets In Denver

Some of the best preventative measures for keeping hornets away include:

Where Is The Hornets Nest On My Property?

Most hornet nests are composed of a “papery” material. Bald-faced hornets build aerial nests in larger bushes and trees. Some other species of hornets prefer to nest with exterior wall voids, particularly near attics. Wasps tend to build nests on roofline areas.

The licensed pest exterminators with Beeline Pest Control understand how to get rid of wasps and hornets and how to keep wasps and hornets away.  In addition to stinging insects, our team will effectively oust ants, bed bugs, termites, and a host of other bothersome pests. One of our pest control technicians will promptly visit the property to complete an exhaustive inspection of the premises and propose the best treatment plan.

Contact our friendly staff today to schedule a consultation.